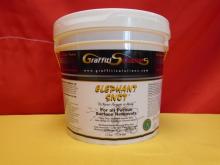 “Their main task was to apply a recently developed chemical solution, known as Elephant Snot®, on the trail's graffiti-splashed boulders.

The solution, designed to penetrate concrete, cement, brick, grout, stone and virtually anything porous, was then blasted with water.

The solution is one of about a half-dozen developed by Minnesota-based Graffiti Solutions and has been in use for less than two years, said Archie Datoc, the company's representative from San Jose.

Saundra Plett, educational director for the San Joaquin River Parkway and Conservation Trust, said that because of the difficulty in removing graffiti from granite, some of the boulders have been covered with the same scrawlings for years.

The decision to use the Minnesota solution was made after Graffiti Solutions conducted a demonstration about two months ago, she said. 'It sure looks like it works,' she said, studying the clean surface of a once graffiti-covered boulder. Precious Myles, 15, a sophomore at Central High, said when she arrived and took one look at the graffiti, she figured everyone would be wasting time trying to clean it. An hour later, however, she couldn't believe her eyes. 'It's amazing,' she said.

Taking part in the project were members of the San Joaquin River Parkway and Conservation Trust, Adopt-A-Watershed, the Fresno Audubon Society, the Fresno Planning and Development Department, the Fresno County Public Works Department and River Tree Volunteers.”
From the Fresno Bee, April 11, 2004, Article by Louis Galvan.

“I purchased a bench as a memorial to my mother in a local park along the river bluff. Somebody put graffiti on the metal bench, the concrete slab and the wooden fence. They used two colors of spray paint and a marking pencil. I used Elephant Snot, a 5 gallon bucket and nylon brush. Since I didn't have a pressure washer or hose I had to use a hand pump used for water fights. Getting water from the river with the bucket and using the Elephant Snot®, I was able to get the graffiti off everything without leaving the slightest trace! ” 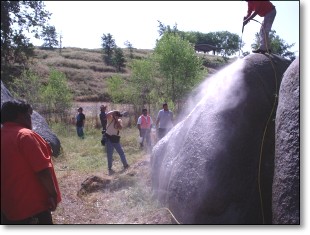 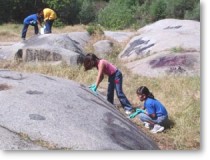 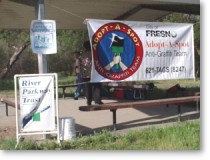